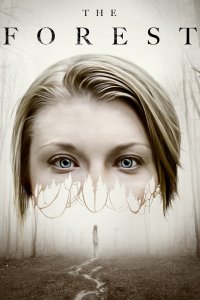 (Not to be confused with The Woods. Different horror movie entirely.)

Being good can forgive a multitude of sins. Unfortunately, The Forest can never be forgiven. The only virtue in this movie is that I got to spend some time in the company of Natalie Dormer, who is quite pleasant to spend time with. Too bad it was in such a forgettable dud.

The Forest endured some well-deserved controversy for exploiting the real tragedies of the actual Aokigahara forest in Japan. Suicide, especially in highly ritualized places, has context, context that shouldn’t just be transformed into ‘the bad ghosts made them do it’ and that’s the end of it—sort of how ‘because they’re crazy’ shouldn’t be the end of the conversation.

There are a few other horror movies that tread a problematic line but recover—sometimes shakily—because they respect that line yet still tell a good story. If you’re going to exploit real people’s tragedies, you sure as hell better do a good job, or else you wasted everyone’s time and money AND pissed a lot of people off. Congratulations.

The Forest, however, brings absolutely nothing new to the horror table—just twin magic (the movie establishes that the main character is a twin multiple times over in the first thirty minutes, as though the first five times just weren’t emphatic enough), a series of jump scares that we’ve all seen before, getting lost in a forest that was much more unsettling when Blair Witch did it, Japanese demon makeup that we’ve seen done better, (American) tourists making bad choices, and no real understanding for why Aokigahara is a suicide forest in the first place.

I’m not going to belabor the point. The horror elements of this movie failed so hard that it really isn’t worth the effort.

Here’s what they could have done to make it better:

Scrap the Japanese suicide forest idea. The Grudge remake with Sarah Michelle Gellar did a decent job showing the disorientation of being in a different country, but The Forest barely addressed its setting except in the most sweeping, simplistic, inaccurate, and sometimes insulting terms. Why did the twins go to Japan? Because that’s where the forest is. That’s it. So scrap Aokigahara entirely. We have forests aplenty in America, Canada, and Europe that can have just as unsettling backstories (see: the blooming Folk Horror subgenre). You can make shit up and still say it’s ‘inspired by true events’ because Aokigahara was the springboard.

Next, respect the reasons for suicide locales. If you know the reasons why people go to specific places, and if you acknowledge cultural patterns of suicide, you’ll be able to create a richer mythology, because the tragedy will be real rather than exploitative.

Focus less on the supernatural horrors, especially if you don’t know how to do them properly. In movies like this, supernatural horror only exists to enhance the real kind. The most interesting, human part of THE FOREST was the guide who led the journalist (Taylor Kinney, if it matters to you) and Dormer into Aokigahara on his suicide rounds, a job that he does pro bono to help dissuade people from suicide if they’re still alive or mark where the bodies are if they’re not. It’s a thankless, joyless, incredibly poignant task. That’s where the emotion is, which is where the story wants to be.

The heart of horror is often sorrow, and horror should be human before it’s monster. When studios want to make a horror movie, their biggest misstep is usually prioritizing the monster over the humans, meeting the creepy visual and jump-scare quota to justify the genre label over producing a good story, because horror audiences will watch whatever commercialized crap they put out.

I’m not saying we won’t. After all, I didn’t go to the theater for The Forest, but I caught it on Netflix, hoping it would be better than I heard it was. I’m willing to watch a lot of dreck churned out by the horror movie machines, looking for hidden gems among the rubble, but this isn’t one worth repeating. It has no staying power, no potential to become a cult classic, and ultimately needs to be forgotten.

Someone get Natalie Dormer a good horror movie. I’ll wait.