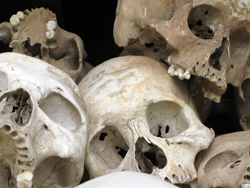 At the time I wrote the first draft of Nocturne, then called Nightmare, I was at a strange place in my experience of the horror genre. I’d read most the RL Stine oeuvre from children’s books to young adult, then devoured Christopher Pike. Dracula was (and still is) one of my favorite novels, and Jekyll & Hyde was my favorite musical. I’d started reading Stephen King and Thomas Harris in secret, because my parents thought I was too young for them. I’d been introduced to a handful of horror movies, but only PG-13 at the time. I loved horror, but I was still fresh enough to it that I hadn’t started seeing the mechanics of the genre—the conventions, the cliches, the timing, that sort of thing.

It wasn’t until my freshman year of college that I really started watching all the rated-R horror movies I’d always wanted to watch, and it’s been steady consumption since then. But I wrote Nightmare in the summer between the end of high school and the start of college, before I’d introduced myself to Freddy Krueger or Michael Myers or the Wishmaster, before I’d experienced the sensuality of Coppola’s Dracula or the brutality of Saw and Hostel, before my family had started bingeing on The Twilight Zone every New Year’s, before I knew about the meta-horror of Scream or the way a person can use horror trends to gauge a whole society’s fears.

Between the first draft and the first rewrite, I had about nine years to develop a finer palate for horror appreciation as well as my skills as a writer. I added a few new elements to the story to add some much needed meat to the bones (the first draft was a little more than half the size of the final draft) and fixed the beginning and ending. (Beginnings are always my weak spot, but that original ending was truly awful, and even at the time I knew how unsatisfying it was .) It only needed one more reworking to fix some of those new elements before I was finally satisfied with the body of the novel, somewhere around two years later, and set forth polishing it.

And now here we are, thirteen years from the first draft. I don’t know how many versions there have been—somewhere between twelve and fourteen. It’s a love letter to the horror genre, a sprawling examination of demons that have plagued me from puberty through adulthood, though I don’t suffer nightmares nearly as often as you might think. Nocturne itself, a novel of nightmares, isn’t based solely on mine. I made sure a few of them make a cameo, because how could I resist?

Parasomnias (sleep disorders) have intrigued me more over the last few years, though, because I started experiencing the hypnagogic hallucinations commonly referred to as exploding head syndrome, which sounds a lot more alarming than it is.

I sometimes wake up to the sound of a terrible scream that’s almost mechanical but still sounds so very human—except I experience the sound as though it comes from inside my head. It isn’t thought-sound. I experience it as actual sound. I’ve also woken up to thumps and knocking. On occasion, I’ll think the cat has jumped onto my legs or I’ll think someone’s tapping me awake, but nothing is there (touch hallucination, a bit rarer).

Just last night, I had some trouble in the middle of the night passing between dream state and waking consciousness with some auditory hallucinations—voices of my family that I knew were from evil spirits, actual voices that woke me up because they were heard and not just thought, but I kept waking up first in the dream before waking up for real, so it got a little confusing.

It’s a fascinating phenomenon, and though these auditory hypnagogic hallucinations are usually accompanied by a sense of dread or the feeling that what it’s coming from is evil or demonic, once I’m awake, the worst I feel is a bit unsettled. As long as these things don’t repeat when I’m completely awake, I calm down pretty fast. It helps knowing what’s going on and not actually worrying about evil spirits in my bedroom. I think if I had visual hallucinations as creepy as the auditory, I’d be much more freaked out. It would be a lot harder for me to convince myself that what I’m seeing isn’t real.

And strangely, just this year, I’ve also had markedly more nightmares than usual. I’ve always had bad dreams, but they say the difference between a nightmare and a bad dream is that a nightmare wakes you up because your brain can’t handle it anymore. The tornado dreams I’ve had all my life used to create tornadoes all around me, with only the threat they’d hit. Now, however, they’re hitting. Last night (after the hallucination/evil spirit nightmares), I dreamed interstellar grasshoppers were crawling into people’s mouths and taking them over. The zombie dreams are getting more intense. One night, I woke up from a tooth-crunching dream with aching teeth—I assume from grinding them, but for a second, I thought I’d really crunched my teeth down. I got a sleep guard pretty soon after that.

Sometimes I’ll die in a dream and jolt awake with a hypnic jerk, which I’m also prone to, and there’s a theory that hypnagogic hallucinations are just hypnic jerks translated into sensory representation because the brain gets its wires crossed.

But I’m a little strange, because about seventy-five percent of the time, even though I still have residual terror in my system, I’ll be so intrigued by the nightmare upon waking that I’ll deliberately go back to sleep to try to go back into the dream and see what happens. Side effect of being a horror geek, I suppose, and I’m always on the lookout for the next horror idea. I won’t lie—I’ve come up with a few good ones by doing that.

Here’s hoping that Nocturne is just the first fresh hell I can share with you. Because these hells are far preferable to the ones I have to wake into.